"How the GOP Went Zionist" with Tevi Troy

The Republican Jewish Coalition
Invites You to a Policy Lunch

How The GOP Went Zionist

From Eisenhower to George W. Bush,
a Historical Overview of a Political Conversion 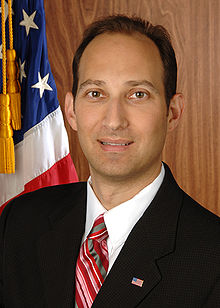 Tevi Troy is the President of the American Health Policy Institute. He is also the author of the best-selling book,What Jefferson Read, Ike Watched, and Obama Tweeted: 200 Years of Popular Culture in the White House. He is a frequent television and radio analyst, and has appeared on Bloomberg, CNBC, CNN, Fox News, Fox Business, and The NewsHour, among other outlets.

Dr. Troy previously served as the Deputy Secretary of the U.S. Department of Health and Human Services, and Acting Assistant to the President for Domestic Policy in the George W. Bush Administration. In the latter position, he ran the Domestic Policy Council and was the White House's lead adviser on health care, labor, education, transportation, immigration, crime, veterans and welfare. He also served for a time as the White House Jewish liaison. He left the White House for a period to serve as deputy policy director for the 2004 Bush-Cheney reelection campaign, where he was responsible for debate preparation.

From 2009 to 2013, Dr. Troy was Senior Fellow at Hudson Institute, where he remains an Adjunct Fellow. He has also been a Researcher at the American Enterprise Institute.

In addition to his senior level government work and health care expertise, Dr. Troy is also a presidential historian, making him one of only a handful of historians who has both  studied the White House and worked there at the highest levels. Dr. Troy is also the author of Intellectuals and the American Presidency: Philosophers, Jesters, or Technicians? (Lanham: Rowman & Littlefield, 2002), and has written over 200 articles, for The Wall Street Journal, The Washington Post, Forbes, The New Republic, Commentary, Reason, Investor's Business Daily, National Review, Washingtonian, The Weekly Standard, and other publications.