RJC Urges Senate to Vote No on Hagel nomination

The ad, titled "Say 'No' to Chuck Hagel," quotes Rep. Eliot Engel (D-NY), Sen. Joe Lieberman (I-CT), and Sen. Lindsey Graham (R-SC), as well as Abe Foxman, Rabbi Abraham Cooper, and the Washington Post editorial board. All of them find Hagel's views and record to be deeply troubling.

The ad urges viewers to call their Senators and ask them to vote "no" on the Hagel nomination.

RJC Executive Director Matt Brooks said, "Chuck Hagel's record on Israel, on Iran, and on other vital defense issues is cause for real concern. President Obama's choice of Chuck Hagel for Secretary of Defense signals a weakening commitment by the President toward Israel in his second term. We strongly oppose this nomination and we urge members of the Senate to do the same."

Click here or on the graphic below to see the ad: 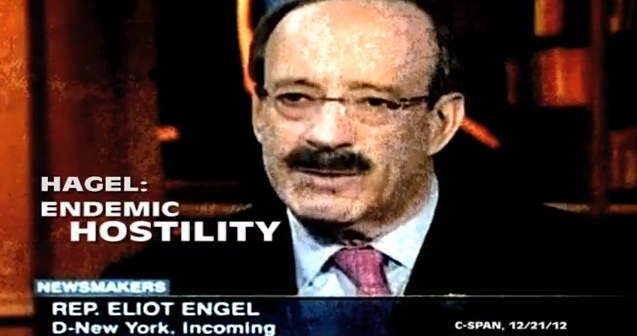 Background: What They're Saying about Chuck Hagel:

Rep Eliot Engel: "It seems there is some kind of endemic hostility toward Israel, and that's troublesome for me and for a lot of other people... I think in the sensitive post of secretary of defense, those are warning bells, those are red lights." (C-SPAN, 12/21/12)

Sen. Joe Lieberman: "Chuck Hagel has consistently been against economic sanctions to try to change the behavior of the Islamist regime, the radical regime in Tehran, which is the only way to do it, short of war." (CNN, 12/23/12)

Abe Foxman: "Chuck Hagel would not be the first, second, or third choice for the American Jewish community's friends of Israel. His record relating to Israel and the U.S.-Israel relationship is, at best, disturbing, and at worst, very troubling. The sentiments he's expressed about the Jewish lobby border on anti-Semitism in the genre of professors John Mearsheimer and Stephen Walt and former president Jimmy Carter." (Washington Post, 12/18/2012)

Rabbi Abraham Cooper: "Whatever the context [for Hagel's "Jewish lobby" comments], the shorthand in the Middle East, Europe and online is so far gone. That terminology is really now shorthand for the worst kind of anti-Semitic mindset." (Washington Post, 12/19/2012)

Washington Post editors: "Mr. Hagel's stated positions on critical issues, ranging from defense spending to Iran, fall well to the left of those pursued by Mr. Obama during his first term - and place him near the fringe of the Senate that would be asked to confirm him." (Washington Post, 12/18/2012)
Israel Newsroom RJC News Obama Iran Ad Defense Hagel
Do you like this post?
Tweet