Washington, D.C. (August 29, 2012) -- The Republican Jewish Coalition today announced a print ad highlighting "Rabbis for Obama" member Lynn Gottlieb and her radical views. The ad will run nationally in Jewish newspapers next week, with a particular focus on Florida, Ohio, and Pennsylvania.

Lynn Gottlieb, a rabbi in the Jewish Renewal movement, was among 600 people touted by the Obama campaign as "Rabbis for Obama." That list includes eight members of the left-wing fringe group Jewish Voice for Peace, which the Anti-Defamation League has named one of the "top ten anti-Israel groups." Lynn Gottlieb sits on the board of that group. She was also the first U.S. rabbi to travel to Tehran since the Iranian revolution and has dined with Iranian President Mahmoud Ahmadinejad.

Rabbi Sam Gordon, co-chair of "Rabbis for Obama," not only refused to remove Lynn Gottlieb from the list but, in fact, came to her defense and accused her critics of "demonizing" her.

RJC Executive Director Matt Brooks said, "Anti-Israel activists like Lynn Gottlieb are far outside the mainstream of the Jewish community, yet the Obama campaign touts them as supporters of the President."

Brooks continued, "The Obama campaign remains tone-deaf about the issues that concern American Jewish voters and naming radical anti-Israel rabbis as 'Rabbis for Obama' is one example of this. This is one reason for the strong sense of 'buyer's remorse' we are seeing among Jewish voters who cast their ballots for Barack Obama in 2008. This is why the Republican Party is making inroads in the Jewish community in 2012."

This print ad is part of the RJC's $6.5 million issue advocacy and grassroots outreach effort in 2012, which includes the MyBuyersRemorse.com site, web ads, extensive TV ads, print ads, mail and phone efforts, and a massive two-day grassroots campaign with volunteers on the ground in key communities on September 9-10.
Click the image to see a full-size PDF of the ad: 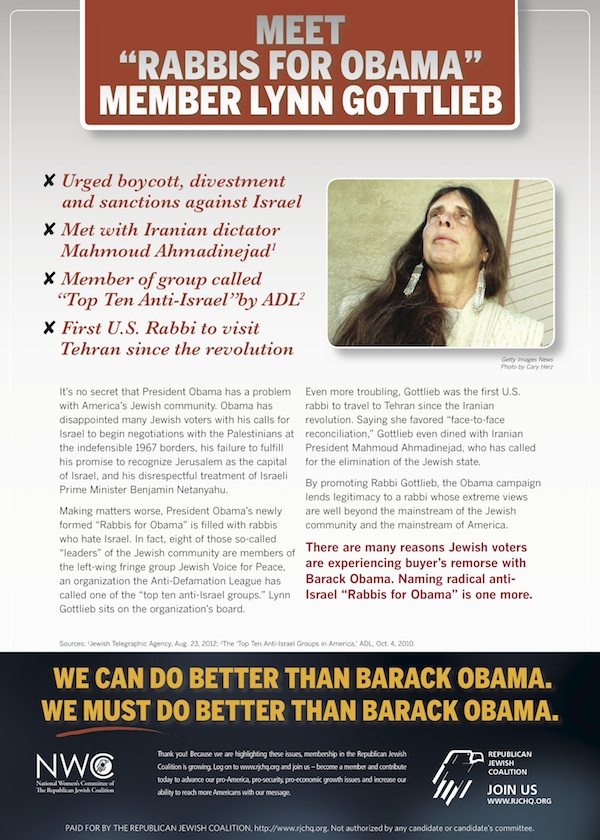