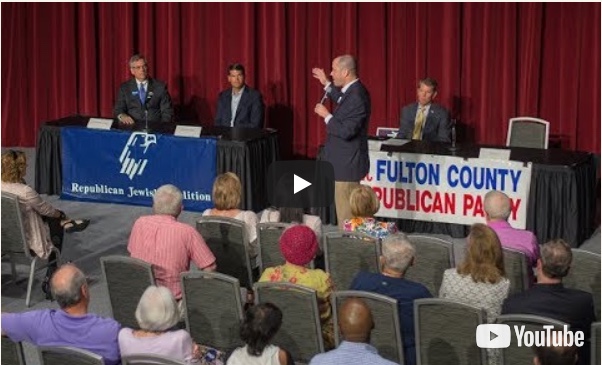 Chuck Berk, co-chairman of the Republican Jewish Coalition of Atlanta, had a couple of questions for the audience at the City Springs complex in Sandy Springs. 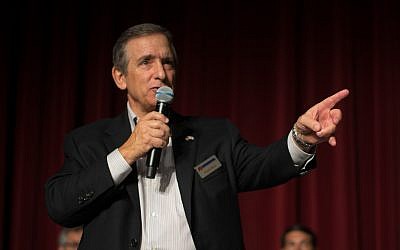 Chuck Berk, co-chairman of the Republican Jewish Coalition of Atlanta, at the Republican candidate forum in Sandy Springs on Aug. 26.// Photo by Ronen Schechter

Berk’s questions about the Democrat nominee for governor elicited chuckles, but no raised hands.

And with that, the 175 men and women attending the Aug. 26 candidates forum sponsored by the RJC and the Fulton County Republican Party heard from the four men atop the GOP ballot in this November’s election.

First up was current Secy. of State Brian Kemp, who is seeking the top job.

“We have never been at a more critical time in a gubernatorial election,” said Kemp, who faces Abrams in the race to succeed two-term Republican Gov. Nathan Deal.

Touting the successes in business and technology development under Deal, Kemp asked, “Why do you want to go on a different path? Why do you want to go from having a small, efficient government that has us the best state in the country to do business in and go to a big government model that will cause you to raise taxes and will no doubt lower that business ranking?” 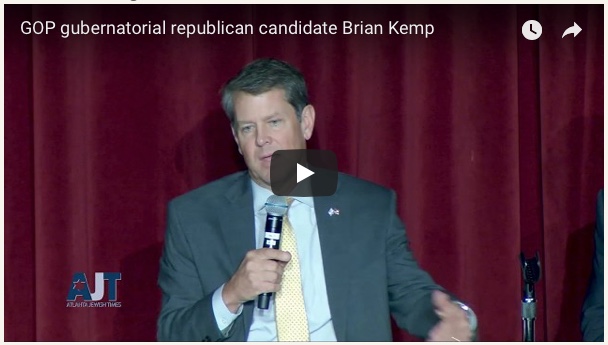 “This is literally going to be a fight for the soul of our state,” he cautioned.

Kemp assured the faithful that the necessary resources will be available.

“You have seen the flow of outside money,” he said, referencing the funds Abrams has raised from outside Georgia. “And you’ve also seen It doesn’t matter how much they’ve got. As we say out in the country, it ain’t going to be enough, because we’re going to raise the money we need to and we’re going to work just as hard as they are.”

Targeting what Republicans see as an Abrams vulnerability, Kemp said, “It’s important, particularly for people in the Jewish community that traditionally are Democratic voters, to know this is not your traditional Democratic candidate for governor. This is someone that’s hanging out with Linda Sarsour and is being funded by people like George Soros.”

Abrams was photographed this past January at a women’s rally in Atlanta with Sarsour, a Palestinian-American activist; organizer of the women’s march in Washington, D.C., the day after President Trump’s 2017 inauguration, and a supporter of the Boycott, Divestment and Sanctions (BDS) movement against Israel.

Soros, whose financial support of various liberal causes has made him a frequent target of conservatives, has made the maximum allowable contributions to Abrams’ campaign. 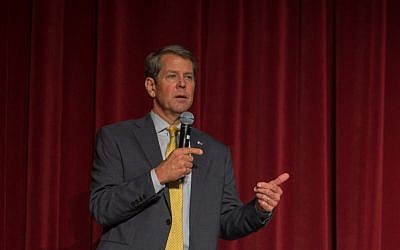 “As governor, I’m going to continue to carry the legacy [of former Republican Governors Purdue and Deal] by purchasing Israel bonds. I’m going to take an economic development trade mission to Israel in my first term,” said Kemp, who added, to applause, that “I’m going to continue to fight and spread the message that Israel has a right to exist as a state and will will not invest in companies that support BDS.”

Kemp noted that while she was minority leader in the Georgia House, Abrams voted against a 2016 measure (which passed and signed into law by Deal) that bars the state from doing business with companies that support BDS (on grounds, Abrams has said, that it would set a precedent of the state deciding which boycott efforts to support).

“We’re in a tough situation right now because we’ve been in power for 16 years,” Kemp said. “We’ve got the greatest story to to tell, and we’re going to do that. But we also cannot get complacent and think that everybody believes that story when they’re this other message that’s out there.”

The last Democrat elected governor was Roy Barnes, who served 1999-2003.

“It sounds great to have universal health care, and that’s what Stacy Abrams says she wants to do, but she’s not saying how much it’s going to cost. And she is saying she’s going to have to take your tax dollars to do that . . . instead of giving it back to you, like I want to do.” Kemp said.

Former state Rep. Geoff Duncan, the Republican candidate for Lieutenant Governor, picked up on Kemp’s theme about outside influences on the election. 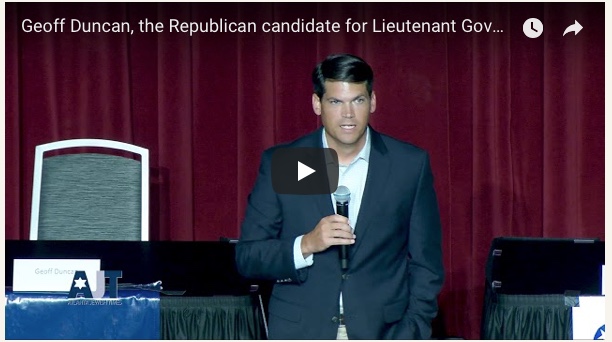 State Rep. Brad Raffensperger, who wants to succeed Kemp as Secy. of State, discussed an issue popular with the Republican base. 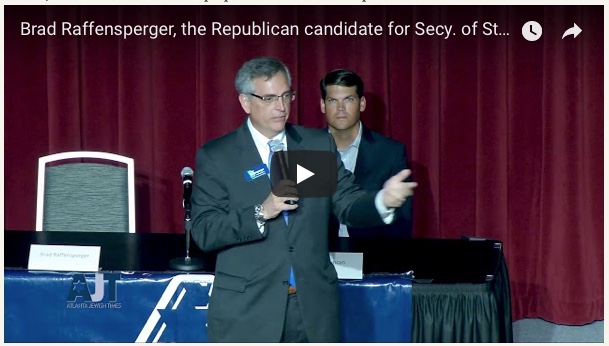 “My commitment to you is to make sure that only Americans vote in our elections,” Raffensperger said, adding that he supports updating Georgia’s voter rolls on a regular basis, and cited a ruling by the Supreme Court of the United States upholding actions taken by Ohio officials.

Noting that Georgia uses 16-year-old voting machines, Raffensperger said, “We need to have something with a verifiable paper audit trail.”

He also used the occasion to mention a letter that he received in February 2017 from Amb. Judith Shorer, the Israeli Consul General to the Southeast, based in Atlanta, thanking him for introducing a House resolution promoting ties between Georgia and Israel.

Attorney General Chris Carr is seeking election to the office that Deal appointed him in October 2016 following the resignation of Attorney General Sam Olens, who became president of Kennesaw State University. Carr said that while working as Washington chief of staff for Republican U.S. Sen. Johnny Isakson and then as Commissioner of the Georgia Department of Economic Development under Deal, he accompanied both men on trips to Israel. 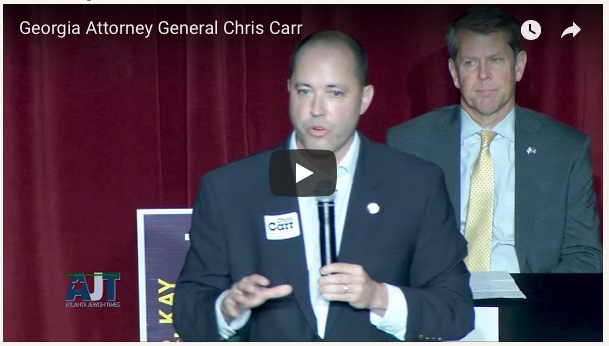 Carr listed issues on which he considers among priorities: child sex trafficking, the opioid crisis, elder abuse, cyber crime, and the proliferation of criminal gangs.

Along with several Republican General Assembly candidates (and the father of an absent candidate) who spoke briefly at the end of the program was Joe Profit, a former Atlanta Falcons running back challenging Democratic incumbent Rep. Hank Johnson in Georgia’s Fourth Congressional District. “I’m tired of hearing insults when I talk about the Fourth District and Hank Johnson. I won’t embarrass you,” Profit said.

Watch the forum question and answer session below: 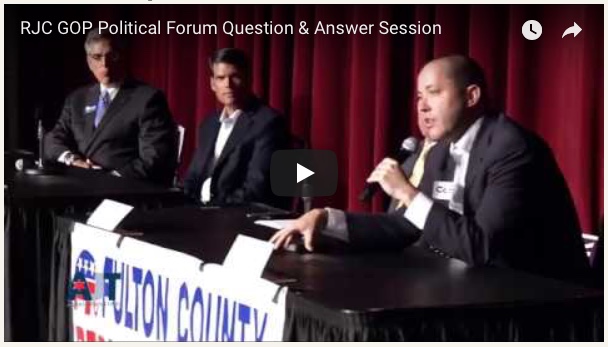 This article appeared on the Atlanta Jewish Times web site on August 28, 2018.