If you thought Day One of the Democrat National Convention was the worst it could get, you haven’t been paying attention. Democrats followed up on their atrocious opening act with an equally offensive Day Two.

Pro-Israel Protestors Greeted Top Democrats Attending A Panel Discussion Hosted By The Radical J Street Group. “A group of pro-Israel protesters made their presence known outside of a panel discussion on the ‘evolving politics of the Jewish community’ put on by J Street, a radical advocacy group that is critical of the Jewish state. The Tuesday morning protest, which was organized by the Republican Jewish Coalition, aimed to tie J Street to the Democratic Party’s presidential ticket, a task made easier since Hillary Clinton’s announcement that Sen. Tim Kaine (D., Va.), a J Street-endorsed politician with extensive ties to the group, would be her running mate. Kaine was one of the senators that decided to boycott Israeli Prime Minister Benjamin Netanyahu’s speech to Congress in 2015. As attendees such as David Axelrod arrived at Davio’s Steakhouse for the event they were greeted by signs that said Kaine is “bought and paid for by J Street” and pointed to Clinton’s support of the Iranian nuclear deal, which is opposed by the RJC and the majority of pro-Israel groups.”­ (Brent Scher, “Israel Supporters Protest J Street at Dem Convention,” Washington Free Beacon, 7/26/2016)

One Day After A Democrat Representative And Super Delegate Called Jewish Settlers “Termites,” Protestors At The Convention Burned An Israeli Flag. 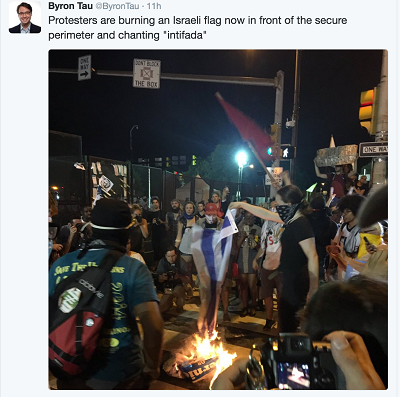 To Cap off The Day, Damning DNC Emails Were Published, Showing Committee Staffers Questioning Holocaust Remembrance Day. "Democratic National Committee staff members questioned Chairwoman Debbie Wasserman Schultz’s request for the group to put out a statement in honor of Holocaust Remembrance Day, leaked emails show. In an email chain from May released as part of the batch of DNC emails leaked by Wikileaks this week, a staffer wrote that an statement marking the day was unnecessary… ‘We aren’t going to do statements for every Jewish holiday unless she wants to do them for every religious holiday and trust me, this Catholic can give you a list of them,’ wrote staffer Kate Houghton… Houghton’s colleague, Senior Communications Adviser Ryan Banfill, replied, ‘This is about remembering the Holocaust. Never forget,’ to which Houghton replied that other genocides should be commemorated in the same way. ‘Yup… or Darfur or Armenia or Rwanda or Bosnia (which PS is where my husband served),’ she wrote. ‘Does she want us to do one for each other those remembrance days as well?'” (“DNC staffers question Holocaust Remembrance Day statement in leaked emails,” Jewish Telegraphic Agency, 7/26/2016)