Day One of the DNC singlehandedly highlighted how far the Democrat Party has moved out of the mainstream with American Jewish voters and how hostile the Party has become.

Morning
Democrat Representative and DNC Super Delegate Hank Johnson Spoke To An Anti-Israel Group Where He Compared Jewish Settlers To Termites.  “A Democratic member of the House Armed Services Committee compared Jewish Israeli settlers to termites on Monday while speaking at an event sponsored by an anti-Israel organization that supports boycotts of the Jewish state. Rep. Hank Johnson (D., Ga.) launched into a tirade against Israel and its policies toward the Palestinians, comparing Jewish people who live in disputed territories to ‘termites’ that destroy homes.” (Adam Kredo, “Congressman: Jewish Settlers Are Like Termites,” Washington Free Beacon, 7/25/2016)

Afternoon
Baltimore Mayor Stephanie Rawlings-Blake Gaveled In The Convention Instead Of The Party Chair Who Resigned In Disgrace After Emails Revealed DNC Officials Planning Attacks On Bernie Sanders During The Primary, Including Plots To Use His Religion Against Him. "Thousands of leaked emails have sealed the fate of Rep. Debbie Wasserman Schultz's uneven five-plus-year tenure as DNC chair… Many of the most damaging emails suggest the committee was actively trying to undermine Bernie Sanders's presidential campaign… On May 5, DNC officials appeared to conspire to raise Sanders's faith… One email from DNC chief financial officer Brad Marshall read: ‘It might may no difference, but for KY and WVA can we get someone to ask his belief. Does he believe in a God. He had skated on saying he has a Jewish heritage. I think I read he is an atheist. This could make several points difference with my peeps. My Southern Baptist peeps would draw a big difference between a Jew and an atheist.’"  (Aaron Blake, “Here are the latest, most damaging things in the DNC’s leaked emails,” Washington Post, 7/25/2016)

Party Business
When It Came Time To Vote On The Platform, A Palestinian Flag Waved On The Floor As DNC Delegates Called For “Occupation” To Be Recognized In The Platform. “Florida delegate Ali Kurnaz, also a Sanders supporter, took issue with the platform’s stance on Israel and Palestine. During the platform vote, he stood in an aisle holding a Palestinian flag and yelling: ‘The DNC platform does not recognize the occupation of the Palestinian people.’ He told ThinkProgress he would be voting down the platform because it makes no mention that Israel is ‘occupying the Palestinian territories.’” (Kira Lerner and Alice Ollstein, “Bernie Sanders Supporters Drown Out Platform Chair’s DNC Speech,” Think Progress, 7/25/2016) 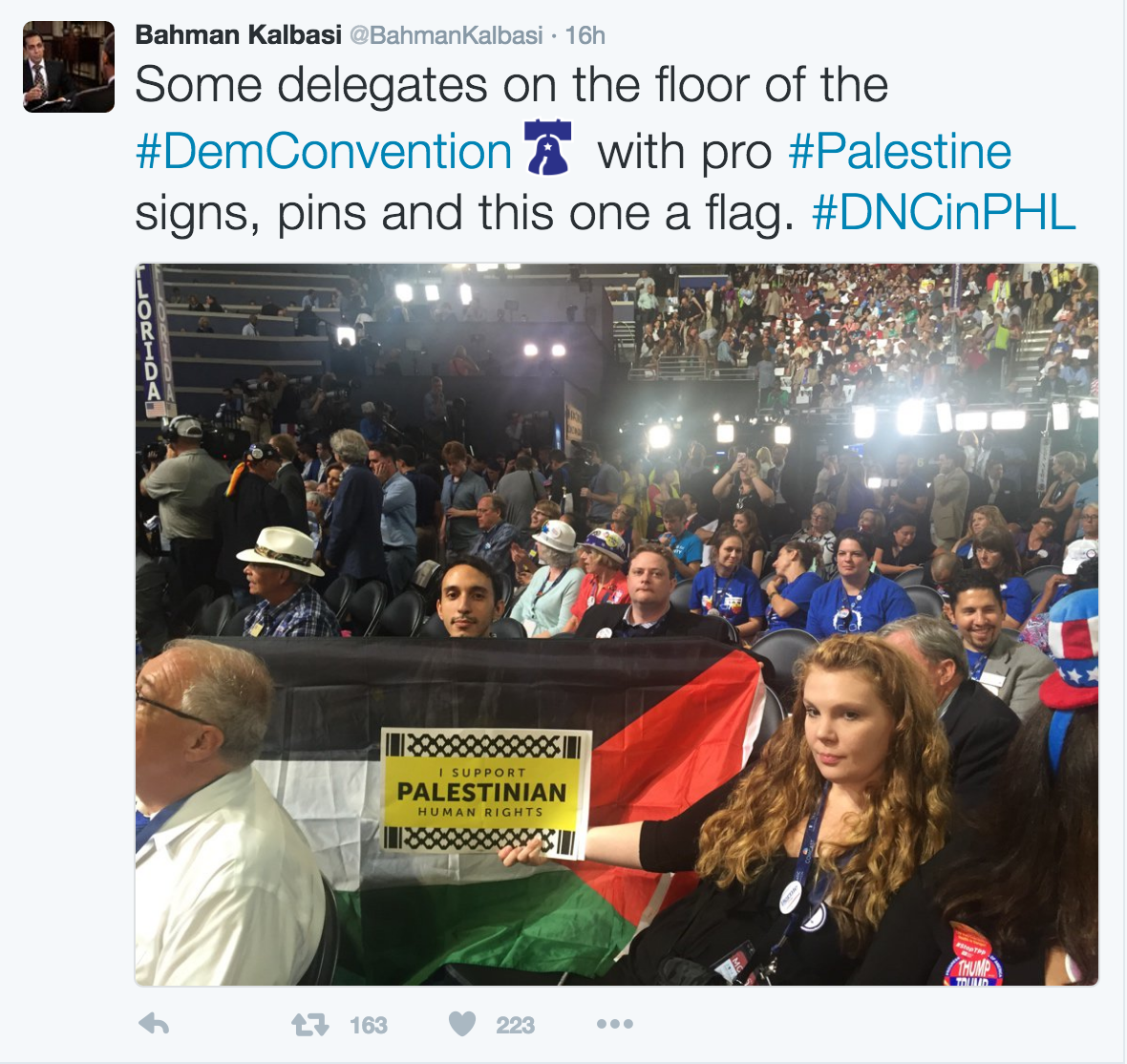 Night
As Recent Terrorists Attacks Have Rocked Both The Country and World, There Were Zero Mentions Of The Islamic State From Any DNC Speaker. “Night one of the Democratic National Convention in Philadelphia had barely ended when the Republican National Committee sent a blast email to reporters attacking the Democrats for ignoring the threat of terrorism when speaking at the podium. ‘61: Number Of Speeches At The DNC Tonight,’ the Republican National Committee wrote. ‘0: Mentions Of The Global Terrorist Threat Posed By ISIS.’ Was the Democratic discussion of ISIS and Islamic terrorism that thin? Basically, yes.” (Louis Jacobson, “RNC is right that no Democratic speaker mentioned ISIS on convention's first night.” POLITIFACT, 7/26/2016)