Radical John Fetterman’s outrageous vigilantism – pulling a shotgun on an unarmed, innocent Black man in 2013 - is absolutely disqualifying for someone wanting to be a United States Senator.

Let’s not forget what happened that day: John Fetterman, armed with a shotgun, chased down a Black jogger and wrongfully held him against his will at gunpoint. This horrifying ordeal is eerily reminiscent of what tragically happened to Ahmaud Arbery - the only difference being that those in the pickup truck in Georgia shot and killed Mr. Arbery. Thankfully, John Fetterman did not pull the trigger. At the time, John Fetterman himself said that he may have broken the law.

To compound this outrage, John Fetterman - to this day - has never apologized to the victim, Christopher Miyares, to the Black community, or to the citizens of the Commonwealth of Pennsylvania.

The voters of Pennsylvania will hold John Fetterman accountable on Election Day this November. And the RJC’s new hard-hitting ads, with $1.5 million dollars behind them, will serve to remind voters of John Fetterman’s appalling conduct. 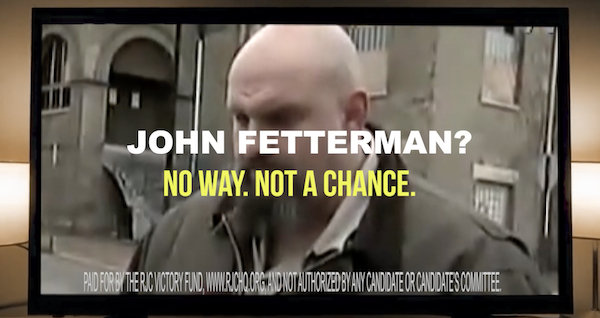 The rotating ads, titled “No Way”, and “We Do Too”, feature Black Pennsylvania voters slamming far-left radical John Fetterman for his outrageous vigilantism, targeting an unarmed, innocent Black man on a Pennsylvania street.

Janice H.: “That’s what John Fetterman said after he chased down an unarmed, innocent Black man - and held him at gunpoint. Now this guy wants to be in the Senate? Are you serious? My message to Black voters: do your homework about John Fetterman.”

John Fetterman: “I may have broken the law.”

Janice H.: “He didn’t even apologize - and now he wants our vote? Not a chance.”

Voiceover: “RJC Victory Fund is responsible for the content of this ad.”

Melvin J.: “That’s what John Fetterman said? After chasing down an unarmed, innocent Black man? And held him at gunpoint?”

John Fetterman: “I may have broken the law.”

Melvin J.: “Now this guy’s running for Senate. You can’t make that sh*t up. He ought to be in jail. Why did John Fetterman see a Black man and do that? He knows why. And our community does too.”

Voiceover: “RJC Victory Fund is responsible for the content of this ad.”